Scale insects comprise a very large group of plant feeders that suck the sap from the plant. They spend some time under a waxy covering that protects them from predators as well as many insecticides. Shellac is made from the wax of a scale insect in India.

is a hardy, easy to grow broadleaf evergreen that comes in a variety of leaf colours - green, green/white, green/gold. Lately many specimens have been killed by euonymus scale which also attacks pachysandra and bittersweet. Most often you will find the stems and leaves covered with needle-thin, white elongated spots. Look closer and you will see larger greyish, oysterhell-looking ones as well. Leaves turn yellow and drop; vines die back. Euonymus on walls are more often infested than other forms.
Eggs begin to hatch in May. The young scales, called crawlers, appear as yellow specks smaller than a pinhead. These small crawlers move to leaves of stems and begin feeding by piercing the plant tissue with thin, thread-like microscopic mouthparts. As they feed, they begin producing the hard protective covering which they extend backwards as they grow.
There can be two generations of euonymus scale. All stages are present in the summer, but crawlers are most abundant in May and August.

Control
Mulch plants and water in dry weather to aid the plant in fighting scale infestation. Trim and remove severely infested material. Repeated Horticultural Oil applications are needed to save the euonymus. Treat all parts of the plants thoroughly. The recommended regimen is an early spring of Dormant Oil application and 2 applications of Horticultural Oil about 10 days apart in May and August (spray when the crawlers have hatched). Unfortunately, euonymus scale is difficult to eradicate.

has recently become more prevalent. This is one of the largest scale insects, with the females up to 3/8 of an inch across. The body is brown and shiny but often covered with powdery white wax. When heavy infestations completely encrust branches, the branches often die. The trees may be severely injured and appear sickly with the leaves remaining small. Excess plant sap is excreted as a sweet, sticky material called honeydew. The honeydew drips on leaves and branches. A black, sooty mold grows on the honeydew, blackening the branches and leaves and detracting from the plant's ornamental value. The honeydew also attracts ants, bees, wasps and flies, which feed on the honeydew and can be a nuisance.

Control
Dormant Oil is applied in early spring or November to control the overwintering nymphs. When the crawlers have hatched, they are vulnerable to Horticultural oil treatments. This should be done in late August and again about 10 days later. On larger magnolias, injectable treatments reduce insecticides going on adjoining lawns or non-target plants.  Acecaps are recommended as part of the control program. The insecticide is absorbed into the plant's sap stream and kills the target pest.

affects Mugho pine and Austrian Pine. The scale appears as small white streaks on the needles. Control with Dormant Oil insecticide or other insecticides. 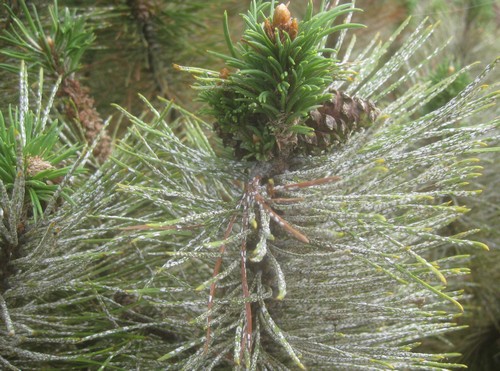 Infects many plants. The most common are lilac & ash but this scale also occurs on privet, maple, linden, spirea, viburnum, honeysuckle, fruit trees, boxwood and willow. The scales look like miniature oysters encrusted on limbs, trunks and twigs.
Other scales can attack junipers, yews and cedars. Control with acecaps on larger trees. Dormant Oil and should be applied.

Please note- Oil sprays in the warmer summer months may cause some damage to the foliage.