When the snow starts to melt off the lawns, we usually get a few calls from people who have found their lawns full of pathways and trails. These surface runways are easy to recognize by the closely clipped turf in the pathway. There may also be clumps of grass that have been formed into nests nearby.
Some people ask if this is caused by moles. Actually they are "Voles". Voles are basically the proper name for field mice. 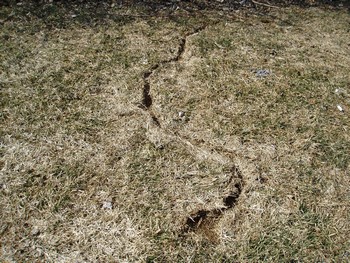 Voles are small, mouse-like rodents that can be found throughout North America. Though they commonly are called meadow mice or field mice, they are distinguished from true mice by their short tails (about one inch long), stocky build and small eyes.

During the winter, the voles are able to run around the lawn under the protection of the snow. During the summer, they tend to stay in the bushes or in the fields where there is more cover. Where snow is piled up, the snow acts as a giant inflatable building which protects the voles from predators. The damage from voles will almost always be in areas where there was a fair amount of snow either piled or from a drift.

You are more likely to have problems with voles if you live in near a field. The voles will migrate from the field to the lawn in order to gain the protection of the snow piles.

How do you get rid of the voles?

Once the snow cover is gone, the voles will go into hiding again - all on their own. If they go back to the fields, that's great. They may take up residence under the shed or under the protection of a dense shrub. Normally there is not a lot to do to get rid of the voles.

Though the damage done usually is not permanent, it may detract from the appearance of a well-kept lawn. Often the pathways are on the surface and the grass roots will recover and grow back.

Most of the lawn will recover on its own. There may be the odd spot that will not. We recommend that in early April you sprinkle a little topsoil and some grass seed to speed up the recovery process.

Vole damage can be lessened by reducing the amount of snow piled up on your lawn, if you have that option.